April 2012 is the 36th anniversary of National Humor Month. Founded in 1976 by humorist and author Larry Wilde, Director of the Carmel Institute of Humor, the aim of this holiday is to promote the value of humor in improving health and enriching the quality of life. Human beings love to laugh, and the average adult laughs 17 times a day. Humans love to laugh so much that there are actually industries built around laughter. Jokes, sitcoms and comedians are all designed to get us laughing, because laughing feels good. For us it seems so natural, but the funny thing is that humans are one of the only species that laughs. Laughter is actually a complex response that involves many of the same skills used in solving problems. 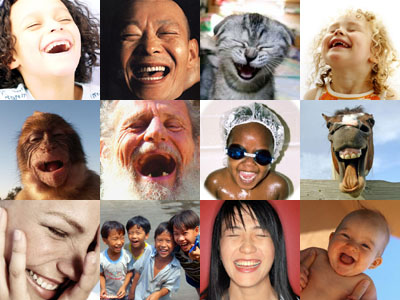 Laughter is described as an audible expression, or appearance of merriment or happiness, or an inward feeling of joy and pleasure (laughing on the inside). It may ensue from jokes, tickling, and other stimuli. Strong laughter can sometimes bring an onset of tears or even moderate muscular pain.

Laughing is a part of human behavior regulated by the brain. It helps us clarify our intentions in social interaction and provides an emotional context to conversations. Laughter is used as a signal for being part of a group — it signals acceptance and positive interactions with others. Laughter is sometimes seemingly contagious, and the laughter of one person can itself provoke laughter from others as a positive feedback. An extreme case of this is the Tanganyika laughter epidemic. This may account in part for the popularity of laugh tracks in situation comedy television shows.

Laughter is a great thing — that’s why we’ve all heard the saying, “Laughter is the best medicine.” There is strong evidence that laughter can actually improve health and help fight disease. Studies show that laughter could be the simplest and surest way to reduce stress and improve physical and mental health.  The study of humor and laughter, and its psychological and physiological effects on the human body is called gelotology. Josh Billings, a researcher from the late 1800s, may have said it best – “There ain’t much fun in medicine, but there’s a heck of a lot of medicine in fun.” Researchers have categorized the five types of humor as puns, exaggeration, surprise, silliness, and put-downs. No matter which of these methods of humor you use, laughing can alleviate stress, reduce depression, enhance mood and even increase activity of immune cells like T-cells that attack tumors and viruses.

Laughter has been shown to improve antibody activity, exercise muscles and lungs, oxygenate blood, and improve digestion. Research at the University of Maryland Medical Center has shown that constantly laughing may also help prevent heart disease.

Did you know that adults laugh about 15 times a day while children laugh hundreds of times a day? As we mature, or at least as we grow older, life’s issues can seem mighty overwhelming. With more and more studies being conducted on the science of laughter, humor has become a growing type of therapy for many. Humor therapy, laughter therapy, laughter mediation, laughter yoga and laughter clubs are all modern tools used to teach us how to deal with everyday life.

Here are three tips to help you put more laughter in your life:

1. Figure out what makes you laugh and do it (or read it or watch it) more often.

2. Surround yourself with funny people — be with them every chance you get.

3. Develop your own sense of humor. Maybe even take a class to learn how to be a better comic — or at least a better joke-teller at that next party. Be funny every chance you get — as long as it’s not at someone else’s expense!

National Humor Month is a time to remind ourselves to not take it all so seriously, to laugh much more and in the end, we will be better able to deal with it all. This April, we invite you to find humor in your life and in doing so, you can begin to laugh your way to a healthier sense of wellness.

Learn more about laughing & the science behind it here:

– Humor: An Antidote for Stress

– Neuroscience For Kids: The Science of Laughing