Along with their space mud, all of the kids got to take home a pipette & water gel crystals! The event was a hit for both High Touch High Tech Chicago & the Homewood Public Library- the dads & sons love being scientists for a night!

If you would like to find out more or about up-coming local events in your Chicago neighborhood, check out High Touch High Tech Chicago’s website:

We would like to wish Robert Bunsen a happy 200th birthday today! Nearly everyone who has set foot in a chemistry lab has seen a variation of the burner that carries his name, but did you know he was blind in one eye from a laboratory accident where glassware shattered during an experiment?

Bunsen created his eponymous and simple heating system with assistant Peter Desaga in 1854 and 1855 while working at Heidelberg University.

At that time, Heidelberg was getting gas lights, and the simple burner created to power gas lights inspired Bunsen to create a simple, easy system for heating experiments.  Thus, the gas-fired burner was born.  Amazingly, Dr. Bunsen made absolutely no money off of his invention, as he didn’t patent it.  Imagine how much money he let slip from his fingers, given that the Bunsen burner is in every single high school classroom in the entire world.

Still, Bunsen did something right, because the Bunsen burner has been in continuous use for over 155 years, give or take.

You can read more about this remarkable chemist in a short biography by clicking here:

Find Out What Else Occurred Today In Science History! 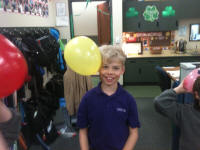 Scientists from HTHT Atlanta took Mrs. Fullilove’s fifth grade class on a “Hair-Raising” adventure and explored the amazing world of electricity. The students at King’s Ridge Christian school in Alpharetta, GA, got hands-on in our “Edison’s Workshop” on March 9th.  The class stepped back in time- to the days of Thomas Edison, learning about the different types of energy & electricity.  All of the kids participated in FUN electrifying experiments- making their hair stand up with static electricity, discovering the direct connection between electricity and magnetism, and even using batteries to make light bulbs light up and bells ring! Check out the pictures below to see just how much FUN science can be!
If you want to find out how to bring FUN hands-on science into your Atlanta area classroom or summer camp- check out

Second-graders got a chance to learn the science behind weather on March 14th  in a series of hands-on demonstrations.

Tornadoes swept through the second-grade classrooms at Concord Elementary School Monday. But these tornadoes were nothing to fear. The kids themselves created them with little more than empty pop bottles, colored water and a little shaking action. Scientist, Mr. B of High Touch High Tech of  Chicago, led the students through hands-on demonstrations to help them better understand the science behind weather. In addition to the pint-sized tornadoes, the kids also made “snow” by adding water to gel crystals, touched the outside of a lightning-filled glass globe and witnessed how salt melts ice.

Second-grade teacher Courtney Cozzolino said it was the first time the school had asked High Touch High Tech to give a lesson on weather. “(The kids) are absolutely thrilled about it,” she said. “They’ve been talking about it all week.”

The demonstrations were a great way for the kids to actually see in action the concepts they’d been discussing recently in class, Cozzolino said. “It reinforces the skills they’ve learned, which is exactly what you want as a teacher,” she said. “It’s able to make it concrete, which is exciting.’ And there was no lack of excitement in the classroom. As the instructor announced their chance to touch the lightning globe, the kids gasped and shouted their reactions:

But even though some doubted the sanity of touching a glass ball full of static electricity, the demonstration quickly became a class favorite.

“It wasn’t actually scary; it was cool,” second-grader Luke said. In another classroom, second-grader Tristan marveled at the snow demonstration. “The snow is fluffy and wet!” he said in disbelief. And for some students, it was just too hard to pick a favorite moment. “This is my favorite,” second-grader Zachary said. Then he giggled. “Actually, all of it’s my favorite.”

If you would like to find out how to bring FUN Science to your Chicago area classroom, check out High Touch High Tech of Chicago!

High Touch High Tech Atlanta is bringing their exciting & fun “Finally Fun Machines” program to Anderson Elementary School today! Anderson Elementary school, located in Clayton County, GA has 77 students that are spread throughout the 4th grade class. Each student will get have the opportunity to get hands on while they discover the FUN world of machines.  They will get to meet the Facilitator, our cool multi-personality compound machine. Engage in pulley power, lifting levers, and incline plane antics as they build one big machine with all six simple ones. The 4th grade class will definitely get “energized” today as they “work” through potential and kinetic energy!  This sounds like it is going to be a great day for science in the Atlanta area.

If you want to find out more on how to bring hands-on FUN into your Atlanta school, home or summer camp – check out their website:

Look to the skies this Saturday night, and you’ll see the biggest and brightest supermoon of the year!  In fact, Science.com says that the full moon on March 19th of this year marks the closest and brightest Earth’s moon has orbited the planet in eighteen years.
A ‘Supermoon’ is a term coined by astrologer Richard Nolle over thirty years ago.  It refers to a moon that reaches the perigee of it’s orbit around Earth at a nearly new or full phase.  The perigee is the closest point to Earth in the moon’s elliptical orbit.  When the moon reaches it’s perigee this Saturday, it will be 100% full, making the satellite appear bigger and brighter than it’s been in years. (NASA.gov)
You may ask how a  “Lunar Perigee” is determined? A Lunar Perigee occurs when the moon reaches the closest point to Earth, as it travels along on it’s elliptical path.  Alternately, the moon is said to be at apogee when at it’s furthermost position.

The moon during lunar perigee is roughly 30,000 miles closer to Earth than at lunar apogee, or roughly 221,000+ miles away.

If you’re wondering what the supermoon will actually look like to the naked eye this Saturday night, Universetoday.com has the pictures, courtesy of NASA

At the very least, when the moon rises at sunset in the early evening of March 19, it’ll probably produce a great photo op.

Saturday, March 12th marked to premiere of High Touch High Tech’s “Science Saturday” at Barnes & Noble. The event was a great success that allowed children of all ages to get hands-on & have FUN with science! Over 150 kids came out to visit us at the Asheville Mall &  took part in awesome science experiments such as Chromatography,  making our signature “Space Mud”, and the hair-raising Vanda graph!  Parents had the opportunity to sign up for our E-News & receive a free take home experiment as well as be entered into a drawing for an official HTHT Gift Bag! The winners of the drawing were:

We hope all the winners enjoy their awesome gift bags that were filled with cups, notepads, HTHT Hats, & more!

The pictures below are just a peak into all the fun things we did.  To find out more about our next “Science Saturday” event or other great community events, check out our website www.ScienceMadeFunWNC.net or become a fan of our Facebook page for up to date programs- www.Facebook.com/HTHTWNC

High Touch High Tech of Atlanta are gearing up for another sizzling summer full of fun science! Last year, summer of 2010, HTHT Atlanta started their week long Sizzlin’ Science Summer Camps. From 9:00am – 3:00pm, kids got a chance to discover the scientific world around them. Judging by the pictures, they all had a blast! This summer, HTHT Atlanta will have 5 city locations around metro Atlanta that will host their  Sizzlin’ Science Summer Camps. The five week long camps will be in Atlanta, Marietta, Lawrenceville, Cumming & Alpharetta Georgia.  They have also extended their Science Saturday dates to include March 26th & April 16th. You can find out more information on both the summer camps & Science Saturday by checking out their website: 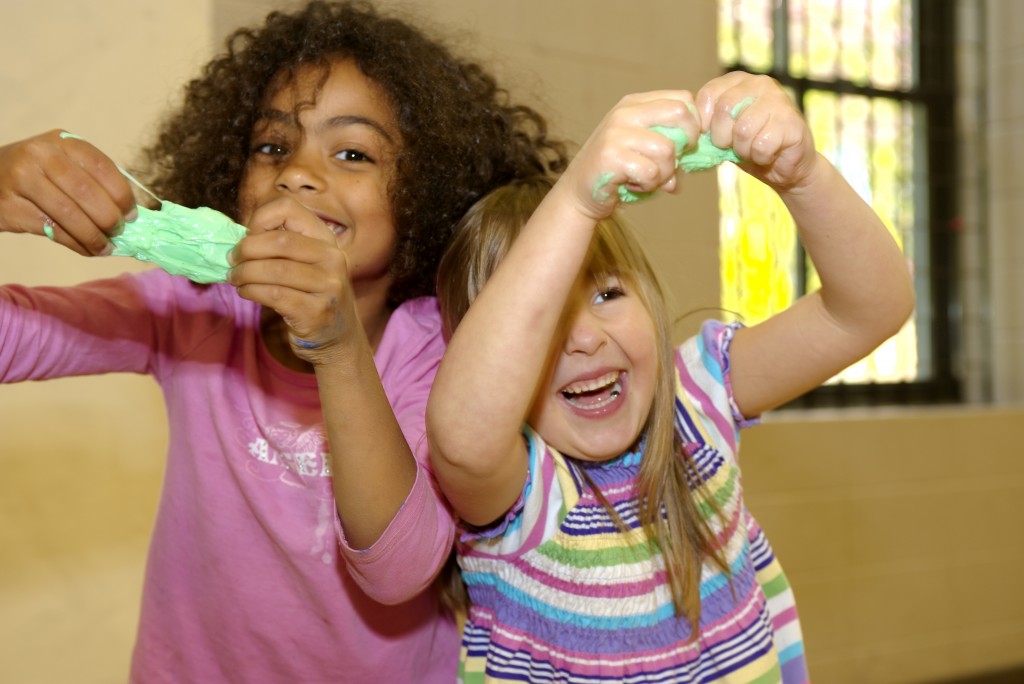 Who’s ready for some fun?!

Come out and join us for our FREE “Science Saturday” event this weekend at Barnes & Noble in the Asheville Mall! From 10am-2pm, children of all ages will participate in a FUN hands-on science experience – “cheMystery”. Each child will get to make & take home their very own “Space Mud” & parents can register to win awesome HTHT door prizes that will be handed out each hour!

A new vent has opened at one of the world’s most active volcanoes, sending lava shooting up to 65 feet high, scientists at Kilauea volcano said Sunday.

The massive eruption began when the floor of the Pu’u O’o crater collapsed, making way for the lava to come out. The spectacle was incredible, and according to the Hawaiian Volcano Observatory, this is a very exciting moment in every scientist’s life, especially if they can see it from the very start. Although at the beginning lava receded rapidly, after the eruption which took place at around 5pm local time on Saturday, it seemed to have slowed on Sunday.

Although more than 150 small earthquakes have been recorded in the last 24 hours, no homes in the area are under threat. Furthermore, according to the scientists at the Hawaiian Volcano Observatory, the volcano could have erupted without a notice, thus posing a threat to the visitors or to the hikers, who were around in the area. They went on saying that lethal concentrations of sulphur dioxide gas were present in the area, but they did no harm. Given the recent eruption, the Hawaii Volcanoes National Park has closed Chain of Craters Road alongside with the entire rift zone and coastal trials, as well as the Kulanaokuaiki campground. These areas are closed until further notice.

For those who don’t know, the Kilauea Volcano has been one of the most active volcanoes in the world, given that it is continually erupting since the 3rd of January, 1983. According to scientists, pictures of the volcano can be seen at the U.S. Geological Survey’s website, where pictures are constantly uploaded, given there is a webcam which functions constantly.

You can learn more about the volcano eruption by checking out these sites:
http://news.yahoo.com/s/ap/20110307/ap_on_re_us/us_hawaii_volcano_eruption
http://volcanoes.usgs.gov/