Astronomers say they have have discovered a black hole so big that it challenges the theory about how  black holes grow. Scientists said this black hole was formed about 900 million years after the Big Bang. But with measurements indicating it is 12 billion times the size of the sun, the black hole challenges a widely accepted hypothesis of growth rates. So what exactly is a black hole? Well NASA describes it as

“A black hole is anything but empty space. Rather, it is a great amount of matter packed into a very small area — think of a star ten times more massive than the Sun squeezed into a sphere approximately the diameter of New York City. The result is a gravitational field so strong that nothing, not even light, can escape.”

The black hole was discovered by a team of global scientists led by Xue-Bing Wu at Peking University, China, as part of the Sloan Digital Sky Survey, which provided imagery data of 35 percent of the northern hemisphere sky.

In a media release, the University of Arizona said that the black hole powered “the brightest quasar of the early universe.” NASA describes quasars as “the brilliant beacons of light that are powered by black holes feasting on captured material, and in the process, heating some of the matter to millions of degrees.”

“This quasar is very unique,” the University of Arizona quoted lead researcher Wu as saying. “Just like the brightest lighthouse in the distant universe, its glowing light will help us to probe more about the early Universe.”

7,000 feet above sea level and nestled on a small hilltop between the Andean Mountain Range, the majestic city of Machu Picchu soars above the Urabamba Valley below. The Incan built structure has been deemed the “Lost Cities”, unknown until its relatively recent discovery in 1911. Archaeologists estimate that approximately 1200 people could have lived in the area, though many theorize it was most likely a retreat for Incan rulers. Due to it’s isolation from the rest of Peru, living in the area full time would require traveling great distances just to reach the nearest village.

Separated into three areas – agricultural, urban, and religious – the structures are arranged so that the function of the buildings matches the form of their surroundings. The agricultural terracing and aqueducts take advantage of the natural slopes; the lower areas contain buildings occupied by farmers and teachers, and the religious areas are located at the crest of the hill, overlooking the lush Urubamba Valley thousands of feet below.

Machu Picchu is open year-round, but there are two things you can’t count on: dry weather and thin crowds. It can rain anytime, though officially, October to April is the rainy season. And while peak season is July–August, you should always expect crowds.

There are a couple ways you can visit Machu Picchu. You can hike in on the Inca Trail but you should know that the Peruvian government puts a limit on the number of people who may hike this trail per season due to erosion concerns. OR you can fly into Cusco and ride the train to Aguas Calientes (the town at the foot of Machu Picchu).

Happy  On The Map Monday! Stay tuned for next week as we travel someplace else very exotic! 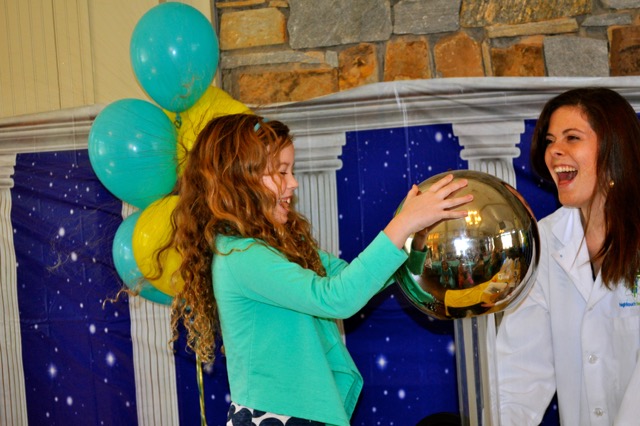 3-2-1.  Blast-off!  At a recent, “Zoom to the Moon” program, I had the privilege to teach children about our amazing universe. The first-grade students had an astronomical time making craters. We became crater makers!

Of course, you can’t discuss the moon without talking about eclipses. Using a flashlight, globe and tennis ball, we acted out a solar and lunar eclipses.  The students then had the opportunity to demonstrate the ordinary cycles of the earth spinning to make a day, the moon orbiting earth to make a month and the earth orbiting the sun to make a year.  For some students, the idea of orbiting was a new concept.  As they realized they were standing on a moving planet, they exclaimed, “Wow, we are actually spinning right now!  Why aren’t we dizzy?”  I love when students’ curiosity is sparked and they make connections.

Our final experiment involved touching a “cloud.”  As we discussed how clouds can block the moon’s light, the students got to touch the vapor produced from a cloud maker.  They were surprised that the cloud felt less like cotton and more like cool, wet air.  How often do you get to touch a cloud in school!?! The children were thrilled to go home and tell their families they had touched a real cloud.

One of the best parts about being a scientist is watching students’ excitement as they learn new facts about our universe.  When students make comments like, “I never knew science was so much fun. This is the best day ever. I never want this class to end,” I know that I have accomplished my goal.

The first time I step into a classroom, the kids see as simply a woman wearing a funny, white coat.  By the time class is over, I am Asteroid Amber, the scientist.  With smiling faces, the students give me hugs, high-fives and ask me to come back soon.  Why?  Because when science is fun, students learn. And, they wonder where the next adventure will take them. 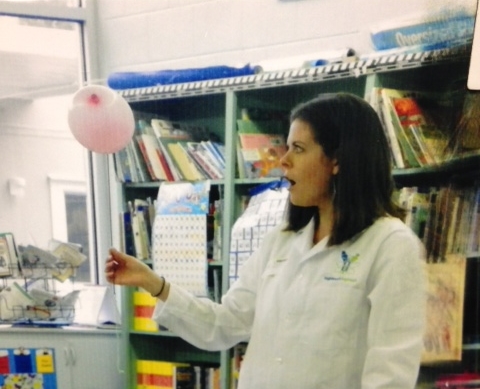 Summer is just around the corner and it will be here before you know it! It’s that time to start signing up your children for summer camps! Try a High Touch High Tech summer camp this year!  Our Sizzlin’ Science Summer Camp field trips bring a FUN, hands-on & educational experience direct to your campers!

Children in grades pre-k through sixth grade will be engaged in 30-minutes of non-stop, hands-on scientific exploration! We use materials that are concrete, safe and relevant to the everyday lives for children of all ages. Upon completion of the field trip, students will receive a cool science certificate and ALL programs include “make-and-take” experiments!

For more information about our Sizzlin’ Science Summer Camp opportunities please visit us online at http://sciencemadefunwnc.net/camp.cfm