The chocolate chip cookie was invented by Ruth Graves Wakefield in the 1930s.

Legend has it that Wakefield was making chocolate cookies and ran out of regular baker’s chocolate. So she substituted broken pieces of semi-sweet chocolate thinking that they would melt and mix into the batter. However, they did not (thankfully!) and the chocolate chip cookie was born!

It’s debatable if we need a holiday to celebrate the treat that makes up a quarter of all cookies baked in America today, but we’re happy to indulge nonetheless.

Celebrate today’s holiday with some sweet science!  If you are wanting to experiment with chocolate chips that is a little less traditional than chocolate chip cookies, how about using them in the bath to wash away the dirt & grime from your day. Yep, that’s right…you can use chocolate chips as a moisturizing soap! The Chocolate is full of oils that will moisturize your body and leave you smelling yummy too.

LEARN HOW TO SWEETEN UP BATH TIME WITH THIS FUN AT-HOME EXPERIMENT! 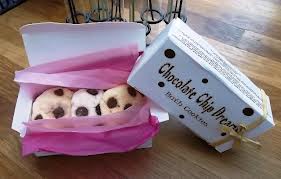 Mix it all together and then cut out with cookie cutters or flatten balls to form a cookie shape. Add the chocolate sprinkles into the mix or simply sprinkle on top.

Wrap these in airtight packaging or seal them in an airtight container as with time these cookies do go moldy. The picture above is of chocolate chip bath cookies.

Get even more FUN, hands-on science experiments on our website – www.ScienceMadeFun.net/experiments

Today, Google celebrates one of Britian’s most famous scientists – Dorothy Hodgkin. Remember in grade school when you did 3-D mapping of specific molecules? You can, in part, thank Dorothy Hodgkin, this incredibly influential British biochemist whose biggest contribution came in her mapping of molecules. Today, May 12, 2014 marks her 104th birthday, and the occasion was celebrated by Google by introducing a Dorothy Hodgkin themed Google Doodle.

Here is what you need to know about Nobel Laureate Dorothy Hodgkin:

1. She Was Born in Egypt

Dorothy Hodgkin was born in Cairo, Egypt in 1910. She was raised as a British expatriate in Egypt by her father John Winter Crowfoot, an archeologist and classics scholar, and her mother Grace Crowfoot, an expert on ancient Egyptian textiles.

During WWI she was sent to England to begin her formal education. Before college, she developed an interest in Chemistry, and while studying at Oxford she became dedicated to X-ray crystallography, the study and mapping of molecular form.

In 1942, as bombs rained down on England, Hodgkin began X-raying molecules, eventually finding the exact structure for the vitamin B12. Her work on B12 catapulted her to international renowned and she presented her research in academies across the globe.

In 1934 and continuing on for many years, Hodgkin’s most renowned work involved the mapping of Insulin.

She is also the only British woman to have ever won a Nobel prize in science.

4. She Was Banned From Entering the U.S. Because of Her Communist Husband

During the height of the United States’ “red scare,” Dorothy Hodgkin was not allowed into the United States. Her husband had been a one-time member of the Communist Party, as had many of her friends and close relations. So, in 1953, as Hodgkin attempted to enter the country, she was denied a visa.

5. A Google Doodle Celebrated Her Birthday

In keeping with their attempt to highlight the achievements of great women in history, on May 12, Google celebrated Hodgkin’s 104th birthday with a Google Doodle. The sketch, which you can see above, mimics the mapping of a molecule.

It’s no secret we love teachers here at High Touch High Tech. Ask anyone and they will share a story about a teacher who made a difference in their life. Whether it was motivating to rise above, helping to understand a difficult concept or just offering hugs and support at the right time, teachers make a lifelong impact.

Teachers come in all shapes and sizes. They engage young minds, serve as mentors and provide endless learning opportunities. Teacher Appreciation Week is May 5 – 9, 2014. It’s the time we give back to those who give so much.

Teachers are one of the most important and memorable people in a child’s life. You never forget your 3rd grade teacher. Or your kindergarten teacher…or your 6th grade teacher…you get the point.

Teachers are there day after day to encourage learning and discovery as well as self confidence, discipline and an endless list of character building skills.

We loved this video from Google & just had to share! This week we say Thank you to the millions of passionate teachers who inspire curiosity in their classrooms…lesson after lesson, unit after unit, year after year.

We’re fortunate to have had worked with many of you and we can’t wait to see what the future will bring because of the work you’re doing today!