A few weeks ago the High Touch High Tech CEO, Daniel Shaw, as well as company Vice President, Terri Connolly visited one of HTHT’s franchise locations in Hanoi, Vietnam. This trip was to have a proper Grand Opening of this franchise location with the company presidents. Please make sure to check out the photos from this awesome visit to Vietnam! 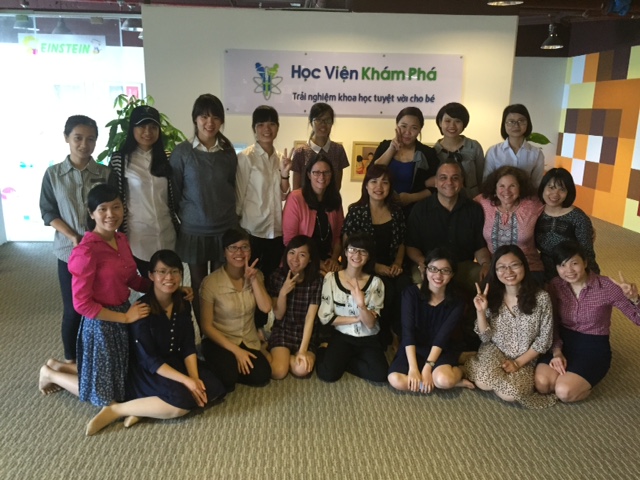 Tomorrow is the first day of May 2015! I cant believe how fast this year is going! So with summer just around the corner…let’s dedicate this Thursday’s post to a very popular summer food…the watermelon! The watermelon is no doubt named after one of it’s main ingredients. But do you know how much water is actually in a watermelon?!

Each bite of watermelon contains about 92 percent water and 6 percent sugar. Despite being mostly water with a bit of sugar, watermelon is considered a very healthy snack. Its high water content helps keep you hydrated. Watermelon is also a good source of vitamin C, beta carotene and lycopene. Although many people don’t like their flavor, watermelon rinds are often cooked as a vegetable in China, which produces more watermelons than any other country in the world. The Chinese stir-fry, stew and even pickle watermelon rinds.

Frogs and toads are classified under the same Order within the animal kingdom; Anura. Under that Order frogs are considered the family Ranidae or “True Frogs”. Toads are in the family of Bufonidae and are considered “True Toads”. But they are both similar in that they first hatched from eggs that are laid in water.

One of the biggest differences that make it easy to distinguish a frog from a toad is what their skin looks like. A frog tends to have moist and smooth skin while toads have dry, bumpy, and usually warty skin. Don’t fret, you cannot get warts from touching a toad!

Another really easy way to tell a frog from a toad is when you look at a frog’s legs! Their legs are long and very powerful for jumping. Toads’ legs in comparison are usually shorter and stumpier. Toads will hop around rather than jump far distances.

So how do you know if you have frogs or toads living in your pond if all you can see are eggs? Easy! Frogs lay their eggs in more of a cluster under the surface of the water, while toads actually lay their eggs in long chains. Some toads do not even lay any eggs but will actually give birth to LIVE young!

The habitat of these two amphibians are fundamentally very different as well. While they are both hatched from eggs out of the water, a frog and toad change their habitats when they grow legs. A frog needs to live near some body of water, while a toad can survive in a drier climate. Frogs are most abundant around bodies of water with many of them living at the water’s edge. The highest population of frogs can be found in tropical forests reaching nearly 5,400 different species! Tropical rainforests stay moist all the time making it the perfect environment and home for all sorts of frogs.

In the words of one famous frog, “It’s not easy being green”. Although green is a common color for most frogs, they can range from any color of the spectrum. Some of the most eye-catching frogs are brightly colored and dressed in vivid yellows, blues, reds, oranges and purple, some with lovely patterns of spots or stripes. These beauties have much too visually admire, but they can’t be touched. Their noticeable coloration serves as a warning to predators to stay away. The most poisonous animal on earth is probably the Golden Poison Frog from Central and South America: There’s enough poison in just one of these frogs to kill 10 people!

Some frogs are considered a delicacy by some cultures! Records show that frogs’ legs were a common foodstuff in southern China as early as the first century AD. It wasn’t until the 12th Century when they started to appear as a delicacy in French cuisine. Toads cannot be eaten in the same way that frogs are. A toads skin will actually give out a bitter taste and a smell that burns like a skunk. This is the reason why toads don’t have many predators!

The end of the frog versus toad battle has come! So who wins this ultimate battle of comparisons? Neither one! Frogs and toads equally as cool and fun to learn about. So now when someone says “what are the difference between frogs and toads” you’ll be able to tell that person all that you have learned from this article!

Wrinkle-causing UVA rays and burn-inducing UVB’s from the sun can be harmful and pose a serious risk to your health and looks. So it is important to take specific safety measures when spending a large amount of time in the sun.

You’ve probably walked into your local store and noticed a whole AISLE of sunscreens for sale….but which one do you pick?! And what the heck does SPF really even mean anyways?

SPF or Sun Protection Factor  is a measure of the sunscreen’s ability to prevent UVB rays from damaging the skin.  If it takes 20 minutes for your unprotected skin to start turning red, using an SPF 15 sunscreen theoretically prevents reddening 15 times longer, which calculates to about five hours of protection. HOWEVER, sunscreens should really only be expected to stay effective for no longer than two hours without reapplication.

Using sunscreen products decreases the chances for sunburn and can prevent skin cancers. According to the American Cancer Society, in 2009, “more than 1 million people were expected to be diagnosed with skin cancer and research studies link skin cancer with sun exposure on unprotected skin”.

Check out this video about how sunscreens protect us from the suns harmful rays!

I’m sure we all have that one friend or family member that likes to “crack” his knuckles. But have you ever given thought to what is actually happening in their hands to make that “cracking” sound? Let’s find out!

According to Wired.com, “In the 1970s, most experts thought it had to do with the collapse of air bubbles in the synovial fluid that lubricates joints.” But apparently there has been new evidence found today that the exact opposite is happening. The sound is is actually caused by the formation of a gas-filled cavity when the bones in joints stretch apart. The cavity or “bubble” of gas forms and then collapses. That is what makes the “popping” sound.

Check out the latest MRI taken of a man who cracks his knuckles!

“Ah-choo!” It is said that approximately 50 million people in the United States suffer from some form of nasal allergy every year. Usually when outdoor molds release their spores, and trees, grasses, and weeds release tiny pollen particles into the air to fertilize other plants. So how exactly do allergies actually work?

Your body’s immune system is able to identify and destroy many foreign invaders. Allergies are the result of a hypersensitive immune system. The allergic immune system misidentifies an otherwise inoffensive substance as harmful, and then attacks the substance with ferocity.

In an attempt to protect the body, the immune system starts a chain reaction that prompts some of the body’s cells to release histamine and other chemicals into the bloodstream. The histamine then causes a person’s eyes, nose, throat, lungs, skin, or gastrointestinal tract to react, causing allergy symptoms. Antihistamine medications are suppose these help to fight symptoms caused by the release of histamine during an allergic reaction. There is no real cure for seasonal allergies, but it is possible to relieve symptoms. Start by reducing or eliminating exposure to allergens. During allergy season, keep windows closed, use air conditioning if possible, and stay indoors when pollen counts are high.

Though it seems fragile, an eggshell is actually really strong because its dome shape. If you have seen the way eggs are sold in the market, you would have noticed that they are kept with their ends pointing up and are never left lying horizontally. Hens, too, incubate their eggs the same way, with the narrower end pointing upwards. What the dome shape of the egg essentially does is that it distributes the weight and the pressure applied on the top evenly to the entire structure, making it one tough nut to crack. Put pressure on the middle part of the egg and it will crack right open.

Check out this experiment done by Imagination Station when a 30lbs cement block is held up by …eggs!