On August 21, 2017, millions of of American’s will see one of nature’s most wondrous spectacles, a total eclipse of the Sun. A total solar eclipse is when the Moon completely blocks the Sun. During a solar eclipse the moon passes between the sun and Earth and blocks all or part of the sun. This can last for up to about three hours, from beginning to end. The Sun’s corona (appearing as a halo around the sun during a total solar eclipse) will shimmer in the darkened sky.  The last time the contiguous U.S. saw a total eclipse was in 1979.

On August 21st, those living and visiting western North Carolina will have the opportunity to witness the solar eclipse at 99% totality! The moon will begin its traverse across the sun at 1pm, covering 99% of the sun at 2:37pm. Be sure to pick up some solar eclipse glasses to protect your eyes!

It’s important to wear the solar eclipse glasses when gazing up at the sun. Because Asheville does not fall on the path of totality, the sun will never be fully covered by the moon. We just want to ensure everyone will have the opportunity to view the eclipse safely! 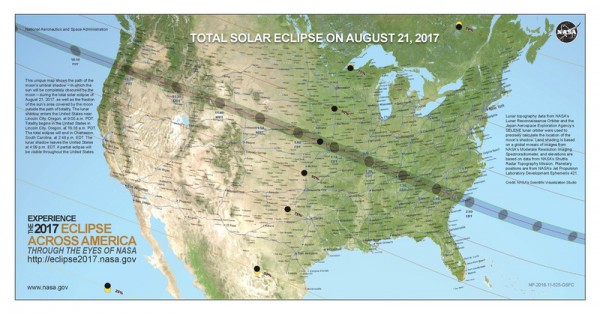