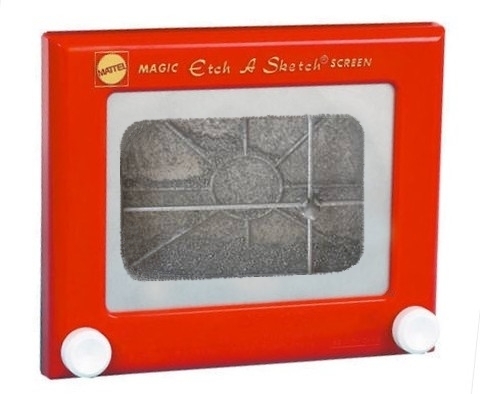 Have you ever wondered what the The Etch-A-Sketch® is really made of? Here at High Touch High Tech, we just figured the iconic toy was driven by magnets. But that is not the case at all! So how does an Etch-A-Sketch actually work?

An Etch-A-Sketch has a thick, flat gray screen in a red plastic frame. There are two white knobs on the front of the frame in the lowercorners. Twisting the knobs moves a stylus that displaces aluminum powder on the back of the screen, which when scraped off by the moving stylus, leaves a dark line on the light gray screen.  The left control moves the stylus horizontally, and the right one moves it vertically. Turning both knobs simultaneously makes diagonal lines. The Etch-A-Sketch employs a fairly sophisticated pulley system that operate the rails inside the red frame that move the stylus around when the knobs are turned. To erase the picture, the user turns the toy upside down and shakes it. Doing this causes polystyrene beads to smooth out and re-coat the inside surface of the screen with aluminum powder. The “black” line merely exposes the darkness inside the toy. What were you able to draw using the Etch-A-Sketch? Your name possibly, or maybe just some lines? I know all that I could really pull off was something that looked slightly like my name! 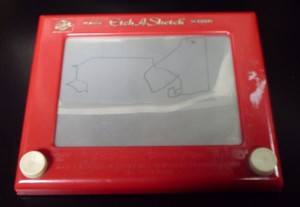 Image Source: https://commons.wikimedia.org/wiki
Andre Cassanges, A French electrician, had the idea for the toy come to him while installing a light switch plate that was coated in aluminum powder. After making some pencil marks on the powder, he noticed that the marks were also visible on the other side of the plate. He took the idea of making electrostatic designs to entertainment, developing what he called the L’Écran Magique (the Magic Screen). Ohio Art bought the design from Cassanges in 1959 for $25,000, which is the equivalent of nearly $200,000 today.

The Etch A Sketch was inducted into the National Toy Hall of Fame in Rochester, New York in 1998, and in 2003, the Toy Industry Association named it one of the 100 most memorable and creative toys of the twentieth century.

Not only was the Etch-A-Sketch a toy, but for some it was a way to make creative and amazing pieces of art! Jeff Gagliardi is one of the original, and one of the best known Etch-A-Sketch artists. He grew up never owning an Etch-A-Sketch and it wasn’t until he was a college student before realizing he had a great talent for using this toy to make masterpieces of art! To see more amazing Etch-A-Sketch drawings check out this link http://www.huffingtonpost.com/2013/07/12/etch-a-sketch-anniversary_n_3581395.html 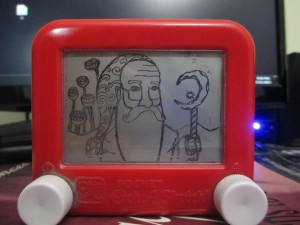 On October 8th and 9th, High Touch High Tech went out to Black Mountain Elementary School where scientists facilitated the Finally Fun Machines program. The students learned about what a simple machine was and also made their own screw with threads using a die and a carrot. By using a “facilitator”, students were able to see many of the simple machines and how they work!