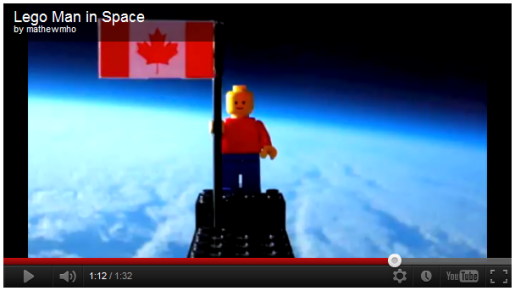 For four and a half months, Canadian high school students Matthew Ho and Asad Muhammed spent every Saturday working on a project.  No, it wasn’t restoring an old car, it was building a homemade satellite/space vehicle.  Somehow, they not only managed to build their spacecraft, they managed to send a Lego minifigure into space.  It’s a shame it wasn’t one of the official Lego astronauts, but the important thing is Canada has gotten someone into orbit!  It’s a victory for the Canadian space program!

The pair were inspired by other videos of people sending balloons into space, possibly these guys.  The two spent only $400 to build their spacecraft, though the planning was meticulous.  They wanted their Lego man to launch and return to them in Canada to avoid having to cross the border to retrieve him.  The ascent took an hour and five minutes; after the balloon popped, the descent took only 30 minutes.  The homemade spacecraft consisted of a lightweight Styrofoam box carrying three point-and-shoot cameras, a wide-angle video camera, and a cellphone with GPS to track the landing. The balloon was bought online and filled with helium from a party store; two mitten warmers were used to ensure the electronics didn’t get too cold on the trip into space.