It’s that time of year again where the leaves are changing colors, little graveyards are popping up in neighborhoods and millions of pumpkins are going through a metamorphosis to become jack-o’-lanterns. It’s Halloween time!

There are some interesting facts and science about the pumpkin.  In history, it was said that the jack-o-lantern was to fend of any evil spirits. Of course, there is no science of any kind to back up evil spirits being chased away by jack-o’-lanterns. BUT, scientists have found that pumpkins have a lot of science associated with them.

Here are some examples:

Scientists have found that pumpkins are incredibly good at taking pollution out of soil! When the scientists planted pumpkins on test areas polluted by dioxin, the large pumpkin plants pulled up the dioxin and deposited it into the plant. Leaving less of the pollutant in the soil and ultimately making the soil pollutant free!

Scientists from the American Chemical Society found that a substance in pumpkin skin fights off disease-causing microbes that try to harm and rot the pumpkin. Without that protective skin, the pumpkin would surely rot long before it was time to carve it. Later, scientists took out proteins from the pumpkin skins, and found that the proteins stopped not only infections in pumpkins but also some common human infections!

Growing the biggest pumpkin has become a popular sport among some farmers — it takes some science for the farmer to grow that monster pumpkin! They use genetics in order to grow bigger pumpkins. They do this by collecting the seeds from giant pumpkins each year and controlling how the flowers are pollinated. Winning pumpkins have weighed in at more than 2,000 pounds!

For some fun at home pumpkin science experiments to try with your kids, 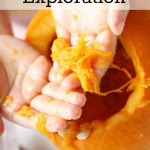 Drop a Warhead in baking soda water, and bubbles erupt. Leave a Skittle in water, and the S floats to the surface. Melt a Starburst, and shiny oil spots form. That’s right, next week is Halloween which means – All Candy. All Science. All FUN!

Candy experiments are a great way to use up all of that candy & still enjoy all the sweetness Halloween has to offer.  Why not play with your candy? Any seasoned trick or treater knows that his loot is full of candy that brings lots of unwrapping and stirring and sticking things together – it’s one of the important parts of the trick or treating experience. We love candy experiments because they can teach basic science lessons about topics such as density, dissolving, and nutrition. Listed below are just a few ideas to get started. Have fun, and as always, let curiosity be your guide!

Here’s A Few of our Favorite!

Acid Test: This experiment tests for the acid often found in sour candy.

Chocolate Bloom: Chocolate is made of cocoa butter, cocoa solids, and other ingredients that have been mixed together. Can you take them apart?

Color Separation (Chromatography): You know candy is colored with artificial dye. To see the different dyes for yourself, try this.

Density Rainbow: Sugar water is denser than water—the more sugar, the denser. This experiment shows you how to layer different densities into a rainbow.

Hidden Candy: Most candy is made from sugar, corn syrup, and flavorings. These ingredients are used to sweeten lots of different foods. Can you find the “hidden candy” in other varieties of food you eat?

Lifesaver Lights: Do wintergreen Lifesavers really make a spark in the dark?

Sink/Float Most: candy sinks in water, because sugar is denser than water.  But some will float. Why?

Oil Test: If you thought your candy was all sugar, think again. Many chewy candies also contain oil. This experiment uses heat to let you see the oil for yourself.

Pop Rocks: What’s the secret ingredient in the candy that crackles?

Sticky You: know candy can cling to your fingers—but how sticky can you make it?

For step-by-step instructions and more information about these experiments, visit www.candyexperiments.com.

The fun doesn’t stop there! Check out these additional resources on ways to make your Halloween scientifically spooky!