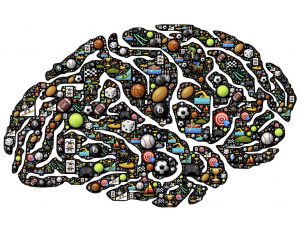 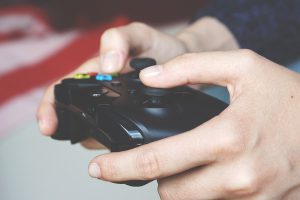 Your brain on video games

Think fast! Your brain is a communication powerhouse! It takes in data, analyzes it, and helps you understand the world around you.  You also move, breath, and live because of the brain. So, what makes your brain tick and what happens when you add outside stimuli – specifically video games?

Think of your brain like an adaptable sponge.  It absorbs information and creates new pathways and skills based off the stimuli. The repetitive practice of a skill grows your brain’s grey matter as new connections are made and neurons fire more messages.  Think of something you do without even thinking – walking, riding a bike, typing on the computer.  All these tasks are things you learned by practicing which lead to your brain creating muscle memory for these actions.  As I sit here typing (not looking, just pressing keys as fast as I can), I think back to the first time I started to learn how to type.  It took time and practice, but now I do it without thinking; my fingers just know where to go to create the words in my head.  That is the defining quality of the brain – its plasticity and adaptability to new information and stimuli.

You can’t talk about the brain without mentioning two of the main chemicals that make all this communication possible – dopamine and serotonin.  They are essential neurotransmitters, which basically means they carry messages to different parts of the brain and body.  For movement, your basal ganglia require the secretion of dopamine, so you can get up and go! Dopamine also stimulates working memory in the pre frontal cortex.  Dopamine has a lot of functions but it’s main role where ever it goes is to stimulate – movement, memory, rewards, pleasure, focus, attention.  Serotonin is dopamine’s partner in crime.  It is another neurotransmitter wrapped up in mood, memory, sleep and cognition. Dopamine is your motivation message, serotonin is the sunshiny feeling you get when reflecting on what you have achieved.  The release of serotonin increases your desire to do an activity because your memory gives you that burst of happiness. Knowing this, you can understand how video games and other technology grab a hold of our brains.

Add video games to the mix and it gets interesting.  There is a lot of research and opinions about video games and the brain, but one thing we can agree on is that these games stimulate the brain!   There have been some studies that suggest that games help us learn and grow grey matter (remember that muscle memory!) and transferable skills, but on the other side is how addictive and, as a result, destructive these games can be.  These games, educational or recreational, tap into the reward center of the brain basically creating a positive feedback loop.  You play the game, dopamine motivates you and excites you. Then, later when you think of the game, serotonin zooms across your brain reinforcing the connection that video game = happy, which in turn leads to an increased desire to play again to relive that feeling.  On ward and round and round – you keep returning to the game to recapture that feeling.

Video game addiction is a real condition.  Imagine all those neurotransmitters firing and that natural high you feel as a result, but you unplug and carry on with life and what you need to do.  Now imagine having to play more and more often to get the same level of happiness and everything – relationships, job, your health – fall by the wayside because you MUST play.  That is the difference where too much video games outweighs the positive benefits and you enter the realm of true addiction.  As you can tell, my opinion is moderation and limits around this type of technology, a little bit is good but too much can have consequences.  An educational game that teaches a child to spell by offering rewards for a job well done is awesome, but when it skews to the other side and effects the wiring of the brain, that is a serious issue.