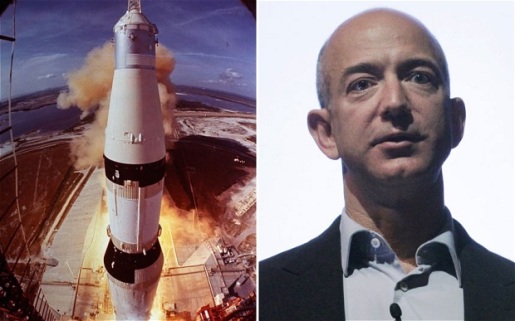 It’s been over 40 years since man first walked on the moon thanks to the brave astronauts of Apollo 11.  Now, an important artifact of the race for space has been discovered some 14,000 feet below the surface of the earth.  Amazon.com founder Jeff Bezos is planning to find and recover the F-1 rocket engines that powered Apollo 11′s Saturn V rocket into space, with the hopes that the Apollo 11 equipment will find a good home in a museum.

“We don’t know yet what condition these engines might be in,” wrote Bezos, who watched the moon landing when he was 5 years old.  ”They hit the ocean at high velocity and have been in salt water for more than 40 years.  On the other hand, they’re made of tough stuff, so we’ll see.”

Bezos has stayed quiet about just how he found the Apollo 11 rocket booster parts, and he’s doubly quiet about who will be paying to bring the 19-foot rocket parts to the surface, only saying that private funds (probably his own private funds) will be bringing them to the surface and that he will be using sonar to find the pieces he’s looking for among the hundreds of NASA artifacts littering the ocean floor near Florida.  The equipment is technically NASA property, but odds are NASA will allow the pieces to go to a museum rather than force Bezos to turn them over to Cape Canaveral staff.