Did you know that galaxies are the vast islands of stars filling space?  Our own spiral-shaped Milky Way, parts of which can be seen on clear nights streaking across the sky, contain hundreds of billions of stars.

Here Are 3  Fun Facts about Galaxies:

Can you Identify These Galaxies??

Join our HTHT @ Home Science Experiment to make your own Expanding Universe:
https://sciencemadefun.net/downloads/Space%20Case_EOTD_May%208th.pdf 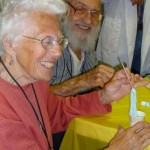 Yesterday was a great day for science! Dinosaur Dan provided some great hands-on experiments with the adults at the Grove Senior Center in Asheville, North Carolina. Many participated in the Molecule Races, Fishing For Ice Cubes, and of course the famous Silly Putty! Always a fan favorite! During all of the fun, there was a camera crew from the local news station filming for their Never Stop Learning segment.
Once again, High Touch High Tech is showing that science can be fun for all ages and we truly never stop learning!