Ahhh, ice cream. A rite of summer. Whether a simple cone, a sundae or a huge banana split- ice cream is the indulgence of choice for families across America. In 1984, President Ronald Reagan designated July as National Ice Cream Month and the third Sunday as National Ice Cream Day. The President recognized ice cream as a fun and nutritious food that’s enjoyed by 90% of the nation’s population. In the proclamation, President Reagan called for all people of theUnited States to observe these events with “appropriate ceremonies and activities.” 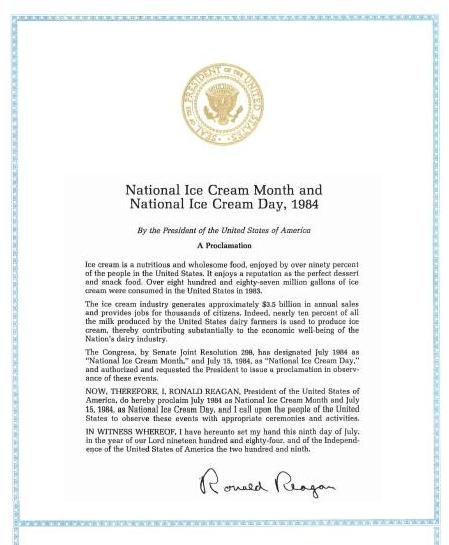 According to the International Dairy Foods Association, the evolution of ice cream began as early as the 4th century B.C. Historians have found records of Roman emperor Nero ordering ice with fruit on it. King Tang of China was the first to experiment with different methods of mixing ice & milk.  Ice cream started in China, and was then brought back to Europe and last but not least America. History books note that some of the greats to enjoy the frosty treat included Alexander the Great, Solomon, Caesar and even Marco Polo.

Ice Cream remained a treat for the wealthy until 1851, when Jacob Fussell of Baltimore realized the best way to avoid wasting cream was to freeze the excess. Ian Harrison said in The Book of Firsts, that Fussell’s iced cream was so popular he set up a factory. On June 15, 1851 he made the first delivery of mass produced ice cream, at a third of the price of his competitors.

Ice cream is similar to hot dogs, everyone has their own accessory or add-on to make it perfect for their palate. Think about all the stuff you can buy that is made to put on your ice cream. You have ice cream cones, bowls, flavored syrups, sprinkles, nuts, caramel, marshmallows, and the list could go on and on.

In 1896, the first ice-cream cone was made by an Italian-American named Marcioni, but the idea was not all the rage until the 1904 St. Louis World’s Fair. Other ice cream treats were soon to follow. After an American confectioner watched a boy agonize over which treat he wanted, chocolate or vanilla ice cream, he began to experiment and launched the first Eskimo Pie when he combined the two in 1921.

An ice-cream seller in Wisconsin always ran low of goods on Sunday, so he served smaller portions and added chocolate sauce or fruit syrup to compensate. The idea became so popular that customers began asking for the “Sunday ice cream” during the week. The Popsicle was also a mishap. An American lemonade salesman left a glass of lemonade with a spoon in it on a cold windowsill overnight. By morning the drink had frozen. When he tried removing it, he was holding the world’s first Popsicle.

The history of ice cream is closely associated with the scientific developments that took place from the 17th century on. As the fields of chemistry and refrigeration techniques expanded, so did ice cream.  One of these major discoveries was that when dissolving salts in water, it would produce a cooling effect.

Today, the U.S. ice cream industry generates more than $21 billion in annual sales and provides jobs for thousands of citizens. About 9 percent of all the milk produced by U.S. dairy farmers is used to produce ice cream, contributing significantly to the economic well-being of the nation’s dairy industry. Ice cream consumption is the highest during the months of July & August.  The number one flavor among U.S. consumers is vanilla, with chocolate, Neapolitan, strawberry, and cookies ‘n’ cream rounding out the top five.

There are some brands of ice cream that are just as American as ice cream itself. Have you ever met anyone who didn’t know about Ben and Jerry’s Ice cream? Blue Bunny, Hagan Daas and Hershey ice cream are huge favorites as well. Whether you prefer a store bought brand or making your own, celebrate National Ice Cream month with a bowl or a cone of your favorite flavor & scoop a little sweetness into your summer!