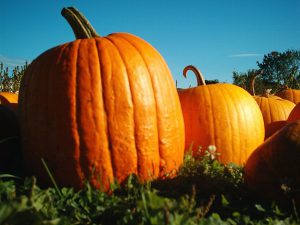 It’s October, which means it is pumpkin time!  Pumpkins are a North American fall staple known for their bright orange hue, hard skin, and round shape.  We bake goodies, decorate with, and carve pumpkins every year, but what makes them special and how did our traditions start? 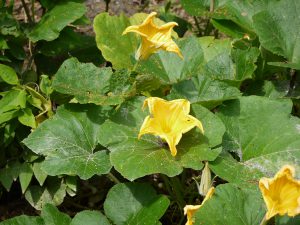 Pumpkins are a cultivator of Cucurbita pepo, which is a family of squash plants.  A cultivator is simply a group of plants preferred or propagated because of specific desirable qualities.  For pumpkins, that is their color, size, and shape and as pumpkin enthusiasts propagate the plants they can enhance certain features. Everyone is on the hunt each year for the perfectly round, bright orange pumpkin to carve and farmers deliver through their propagation efforts. Think of it like a combination of nature and nurture; the traits are there but we breed the plants to enhance the results.  There is one type of pumpkin that has grown HUGE; Cucurbita maxima aka the giant pumpkin.

Thirty or so years ago, the biggest pumpkin ever was only around 500lbs, but now the world record for largest pumpkin ever weighed in at 2,625lbs!  How did this massive growth happen?  Most giant pumpkin growers propagate that specific species with seeds originating from one specific award-winning Atlantic Giant variety of pumpkin.  Their cultivation has one goal: size.  They focus their energy on that trait as they propagate and their efforts echo across future generations producing bigger and bigger pumpkins over time. 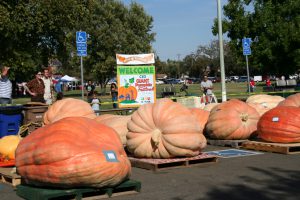 What makes this type of giant pumpkin different from your regular garden variety is that it has oversize phloem.  Plants have two types of tissue responsible for moving nutrients and water around a plant: xylem and phloem.  Xylem moves water and phloem moves sugar or food.  Pumpkins are 90% water but can grow bigger and bigger because of the efficiency of their supersize phloem.  Regular pumpkins are already large compared to other squash and giant pumpkins are even larger.

This trait is further manipulated by cultivators who add beneficial fungi, pruning techniques, special greenhouse conditions and other methods to the mix. Mycorrhizal fungi will happily colonize the pumpkin’s roots and enter a symbiotic relationship that benefits them both.  Thanks to the fungi, pumpkin can more efficiently pick up nutrients in the soil and transport them on their phloem superhighway, and in exchange the fungi gets essential carbohydrates necessary for their survival. More nutrients and bigger phloem add up to huge growth in the pumpkin world!

Pruning a plant’s blossoms down to just a few also helps with growing giant pumpkins because more resources are dedicated to those few pumpkins versus spreading the resources out to many pumpkins.  Again, the goal is to produce a few giants versus many regular-size pumpkins.

Some competition growers also use greenhouses to completely control the environment around their pumpkin.  This takes the guess work out of weather conditions and can prevent them from losing their prize-winning pumpkin to drought or too much rain.  Do you think you’d want to try growing a giant pumpkin? Or maybe you just want to stick with carving the standard 12lb variety.

Pumpkin carving is a great example of America’s culture being a melting pot of ideas.  Pumpkins are from North America but carving vegetables for Halloween is from Ireland! 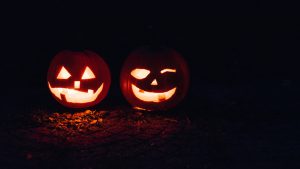 Jack o’ Lanterns have been around for centuries and originated around the Irish myth of Stingy Jack.  People would carve turnips and put an ember inside on all hallows eve to keep evil spirits and Stingy Jack away.  When Irish immigrants arrived in America, they brought their tradition with them and switched to the easier-to-carve pumpkin.

When you carve pumpkins this year, you can try a cool experiment that makes them erupt!

Carve your pumpkin like usual but in the bottom of the inside of the pumpkin put a generous amount of baking soda plus some food dye.  While outside, pour vinegar into the top of the pumpkin and watch as the pumpkin erupts with a fun science volcano effect.  It might pour all out of the mouth or also out of the eyes and nose!

Check out our other SPOOKTACULAR science experiments here!