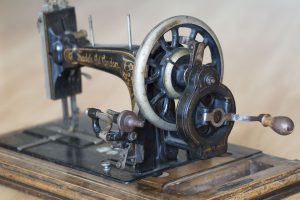 You can trace the origins of sewing all the way back to Central Asia to approximately the year 45,000 BCE. Before sewing, people used strips of furs or animal skins to tie their clothes together, but harsh weather in colder regions caused a search for a better way to keep clothing on. These desperate individuals started by using a sharp stone to pierce a hole in the animal hides, then used their fingers to push thin strips of animal hide through that hole. About 5,000 years after, someone had the idea to put a hole in the tip of this elementary awl so the string could be pulled through with the same motion! Later the first modern needle was invented, most likely carved from bone or ivory, then adapted to cast iron, and finally to sharpened steel needles!

Clothing continued to develop; people began wearing cloth made of yarn instead of animal skins. People began to hand spin yarn using plant, animal, and synthetic fibers into thread, then use this thread to make cloth! After many years of hand spinning yarn, the very first spinning wheel appeared in the 11th century! The spinning wheel was a much more efficient way to spin yarn and became widespread!

Even after the invention of the spinning wheel, making clothing was a lengthy process. It still took a long time to spin the thread, weave the cloth, dye it, and then sew the material into wearable clothing! Each piece of clothing was fitted for a specific person. The women of the family were left the task sewing and mending clothing for their families. When clothing became faded and worn, the cloth would then be re-purposed into quits or other household fabrics!

Making beautiful clothing and fabric became a form of art. Decorative needlework such as embroidery was a highly valued skill, and young women from wealthy families had time to practice and become adept at this delicate task! These women made beautiful tapestries, or a thick fabric decorated with intricate pictures or designs, and they were hung on walls as artwork. Tapestries also served the purpose of keeping the stone floors and walls warmer in the cold winter. Even small tapestries would take several months design and weave, and the larger tapestries could take longer than a year! At the Biltmore Estate in Asheville, North Carolina, there are many tapestries hanging on the walls and decorative sewn carpets on the floors. The home was built back in 1895, and these tapestries and carpets are still on display today!

In the year 1790, Thomas Saint invented the world’s first sewing machine. With the invention of the sewing machine aided by the Industrial Revolution production of textiles left the home and went into factory mills. Huge cotton plantations were located across the southern United States that produced the cotton necessary to make thread, so many of textile mills were established in this area. Cotton needs a long growing season, and the southern climate was prime! The plantations produced so much cotton that the plantation owners were exporting it all over the world! Europe developed their own mills and weaving factories, but cotton crops couldn’t grow successfully due to Europe’s wet climate. Most weaving in Europe was made of a stronger thread called wool, which is collected by shearing sheep! Wars and the Great Depression had an adverse impact on Europe’s ability to produce fabrics.

In 1863, Ebenezer Butterick, an American tailor, and his wife Ellen began to sell tissue paper dress pattern in graded, or sized, patterns. Ellen was frustrated with one sized patterns and wanted a better variety of style and size. They began selling men’s and boy’s clothing patterns, but they were such a huge success that they added women’s and girls clothing patterns in 1866. At the time these patterns cost anywhere from 0.25 to 0.75 cents apiece, which doesn’t seem like much today, but back in these days the average working person made $1 or $2 for a day’s work!

In the early 1900’s, ready to wear fashion became cheap and common. People no longer had to hand-make their clothes and could buy fashionable clothing from the store! Clothing brands, stores, and fashion designers emerged to create and sell this clothing. While many households still have a sewing machine today, it is no longer a necessity to make your families clothing and household materials. Sewing is still seen as art and a form of self-expression today!

One thought on “The History Of Sewing Machines”